There are 4 reasons people typically lie to their therapist 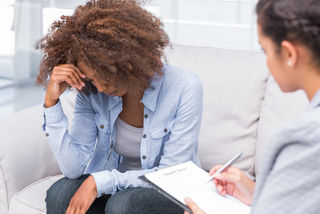 Why would someone lie to their therapist? That’s totally counterproductive, right? You’re paying for it, so what would be the point? However, according to a study published in 2016 in Counseling Psychology Quarterly, of 547 adult psychotherapy clients, 93 percent reported lying to their therapist at some point. This in part, has to do with the nature of truth, which is never just black and white. In fact, in therapy, “truth” is something that emerges over time, when there is a trusting relationship between therapist and patient.

So why do people lie to their therapist?

Shame and fear of judgement

The most common reason patients lie to their therapist are the same reasons people lie to those close to them—shame and fear of judgement. The lies could be about substance use, sexual or romantic encounters they feel bad about, even unusual thoughts they are having.

Dan, a man in his mid-30s, was often attracted to men who were inaccessible. With such partners, there were a few exciting encounters that didn’t lead to a real relationship and left him feeling empty and lost. When he became involved with a straight man from a religious family, his therapist expressed these concerns to Dan who experienced this as judgmental. Without even realizing he was doing so, Dan stopped reporting his encounters with this man to his therapist. Eventually, it came out that he had been omitting this topic from their sessions and they were able to address his feelings of being judged.

No truth without trust

In therapy, you reveal painful and sensitive feelings and memories. The “basic rule” of therapy is to “say whatever comes to mind.” This is a lot more difficult than it sounds, especially if you have a history of betrayal and difficulty trusting people.

It is imperative that trust is established early on. You should feel that the therapist respects you and is open to criticism. Often the relationship with the therapist becomes emotionally charged. At times, you may feel that you love or even hate your therapist. These intense feelings are difficult to state openly.

The therapist should be easy to talk to and able to listen to you without judgement. If you notice that you feel mistrustful of your therapist, bring it up! Over time, if that feeling persists, it might be time to find a new therapist. It is only through a trusting relationship with a therapist that the truth will emerge.

Oftentimes, a patient may intend to be truthful but is not ready to accept the truth about themselves or someone close to them. We all come into therapy with a story or “narrative” about ourselves. As therapy progresses, the narrative starts to change and we begin to see new things about ourselves and others that we may not have been able or willing to see.

April came into therapy because she had been depressed for several months and didn’t know why. She soon revealed a tumultuous relationship with her husband. She complained that he went out every night and came home late without any adequate explanation. One day she found a used condom in a wastepaper basket. When she confronted her husband with it, he told her he was trying a new brand to see if it fit. April accepted this explanation without question. She told the therapist that her husband was completely trustworthy. When the therapist looked skeptical, April reassured her.

To the therapist, it was obvious that April’s husband was cheating on her and she was not ready to admit this to herself—in other words, she was lying to herself.

Not connecting the dots

Some patients may be less than truthful with their therapist not because they intend to mislead or deceive, but because they have not processed past traumas and are disconnected from the ways in which these traumas are affecting their behavior. I call this “not connecting the dots.”

For example, Misha was unable to commit to a relationship because he could never trust anyone enough to let down his guard. He did not disclose to the therapist that his mother suffered from alcoholism and was unreliable and emotionally unavailable, not because he wanted to be deceitful but because he simply didn’t see any connection. This is not lying, per se, but an inability to connect the dots. Misha is aware that he has difficulty trusting anyone and is also aware that his mother suffered from alcoholism but keeps these facts carefully separated from each other.

Can therapy be effective if you are lying?

As stated above, the truth is often not black and white. There are always things in our lives from which we disconnect, and some are more important than others. There may be things that are too shame-inducing, embarrassing, or anxiety-provoking to reveal to even to yourself—let alone to your therapist.

But some issues take time. As with April, she and her therapist worked together over the course of several years before the truth emerged.

If you find that there are more and more things you are hiding or lying about, it is important to address the issue with your therapist. In some cases, you may want to evaluate whether or not a therapist is a good fit.